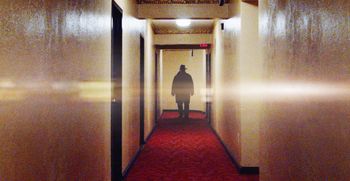 A stranger walks down apt corridor

Stranger hand with gun Close Up

Smoking in the bath

I've been asked what kind of planning went into the film. The short answer would be a lot. But specifically, what about storyboards?

The answer is definitely "yes". Although they're not great art by any means---they were helpful much of the time. Just little doodles that give an idea of what we were trying to shoot.

I would often sketch ideas for what a shot might look like because doing so helps expose problems that might arise or ideas that might be better than what you thought you wanted to do.

A simple drawing sometimes suggests new ideas. And there's no substitute for seeing something in front of you with your own eyes. You're no longer imagining it. Or hoping it will work.  That little sketch kind of tells you "don't do it this way" or "yeah, that's gonna work".

Storyboarding just makes you that much more prepared. If you're concerned or anxious about what something's going to look like then get a pencil and paper and draw it.

A lot of times these little sketches were done the night before the shoot and there would also be a shot list on paper for each day.

You really can't be too organized. So many things to think about and having some sketches and a shot list is kind of basic.

I also have to hand it to actor J.C. Hoffman for pulling double duty as one hell of a great continuity person on the film. Usually, I was preoccupied with the camera, the lights, the sound---worrying about "is this shot going to cut together properly with the next one?" And she would bring things to my attention that we hadn't shot that we were going to need. In her very respectful and sometimes amusing way, she would say "Hey didn't you want to get that so and so shot?" And I would be like "Thank God she notices this stuff!"